The History of La-Z-Boy Inc. & Origin of the La-Z-Boy Name 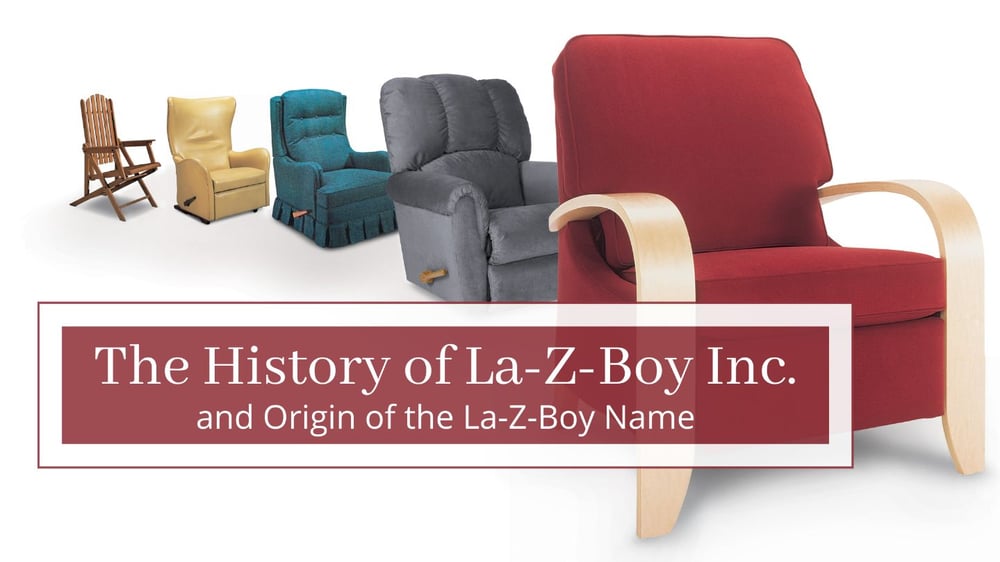 Believe it or not, the origin of La-Z-Boy Inc. dates all the way back to the 1920’s. Since then, the company has grown, evolved, and innovated into a well-known and reputable brand of quality and comfortable home furniture.

In this article, we will take a walk down memory lane and revisit the history of La-Z-Boy throughout the decades. Within this history, including the origin of the name itself. Finally, we will uncover the recent history of La-Z-Boy Ottawa & Kingston, highlighting how our small team is committed to progressing the La-Z-Boy brand into the future!

La-Z-Boy Through the Decades

The La-Z-Boy name has been around for about 100 years! With a century under its belt, the brand has come a long way.

Each decade played a significant role in La-Z-Boy’s development and evolution into what it is today.

The 1920s, otherwise known as the “roaring 20’s”, was a decade of prosperity and dissipation. There was no shortage of jazz bands or flappers in this era.

Amidst the excitement, two cousins were making a name for themselves in Monroe, Michigan, United States. Edward M. Knabusch and Edwin J. Shoemaker were the sons of two farmers.

While they were both hard workers, in 1927 they realized that they preferred working with wood than soil.

With one gifted mechanic and one carpenter and salesman, the two cousins made natural business partners. Their partnership first began as a small business called the Kan-Shoe Company.

Hard at work, their gumption quickly outgrew the small garage they were working out of. With this, they began building their own furniture factory. Floral City Furniture was born.

At Floral City Furniture, the cousin’s first signature product was called The Gossiper. It was a tool to promote relaxation while chatting on the telephone, another fairly new invention at the time.

Next, the cousins created the very first wood slate folding chair. This chair was meant to follow the contour of a person’s body, both while sitting up and leaning back. Starting to sound familiar?

Initially invented to enjoy the outdoors, the chair grew in popularity, and they wanted to make it usable year-round. Knabusch and Shoemaker began to upholster the chairs, adding to their comfort. This was an instant hit! 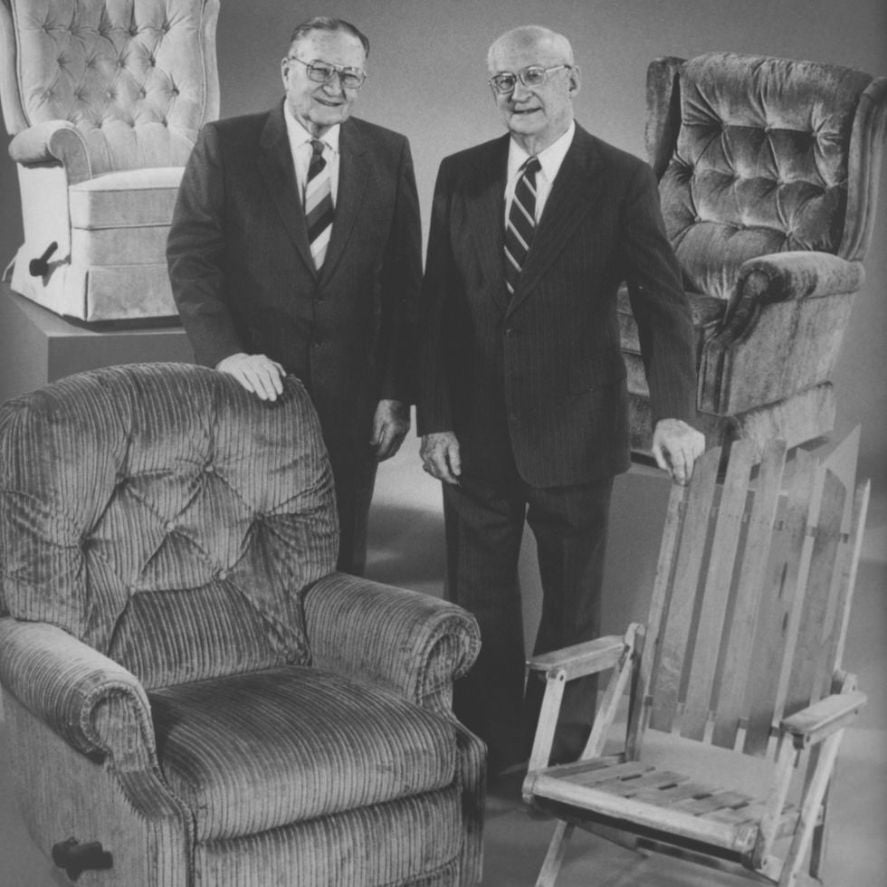 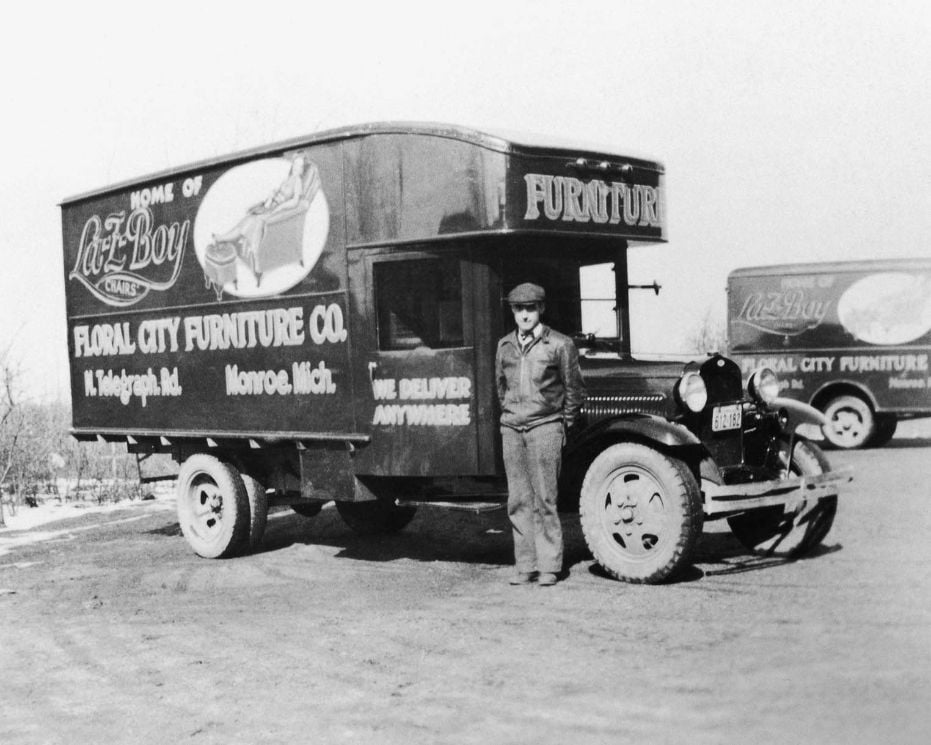 As their innovative chair gained popularity, they realized they needed a catchy name. After all, the upholstered wood slate folding chair is a bit of a mouthful.

To brainstorm a name, the cousins decided to hold a contest amongst the factory workers. Employees submitted their name suggestions, followed by a voting period in which the winner would be sent to print.

There were many great ideas! “Sit N Snooze”, “Comfort Carrier”, and “Slack Back”.

Ultimately, the recognizable name that we all know as “La-Z-Boy” was the winner. It impressed consumers back then and it still has a ring to it today. 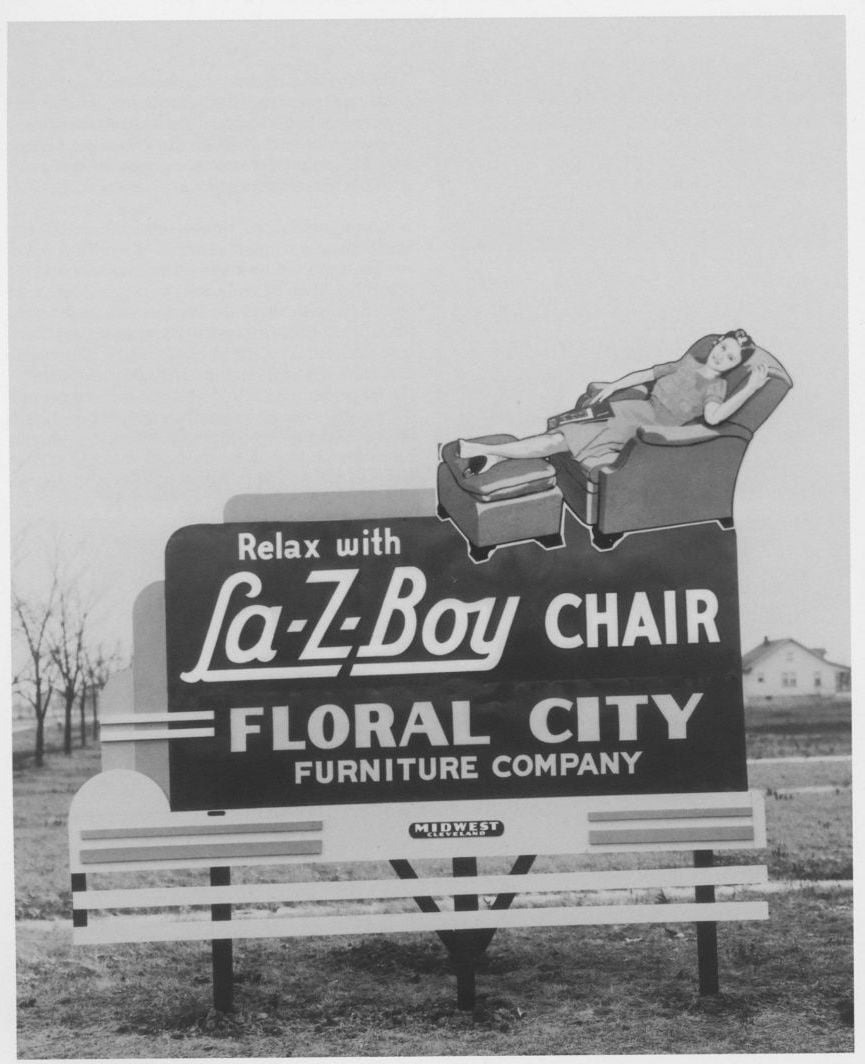 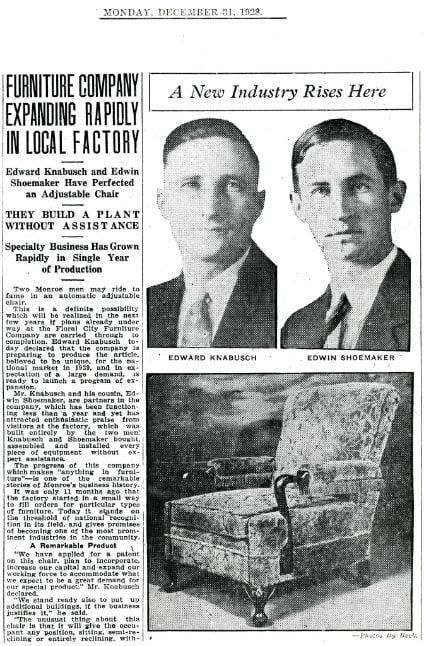 The Spelling of ‘La-Z-Boy’

La-Z-Boy (pronounced lazy boy) is a name that sticks. With a clever play on the word “lazy”, the name La-Z-Boy perfectly embodies the personality of the brand. Sit back, relax, and be lazy in the comfort of your La-Z-Boy furniture.

While the name is fitting and rolls off the tongue easily, people tend to struggle with the spelling.

Some common spelling errors are:

With a hit chair and a catchy name, the brand continued to progress through the 1930s.

Despite the trials and tribulations of the Great Depression, the company did what it needed to stay afloat.

Floral City Furniture accepted payment in the form of wheat, cows, and coal. By remaining flexible with their form of currency, the company was able to transition into a retail store during this time. 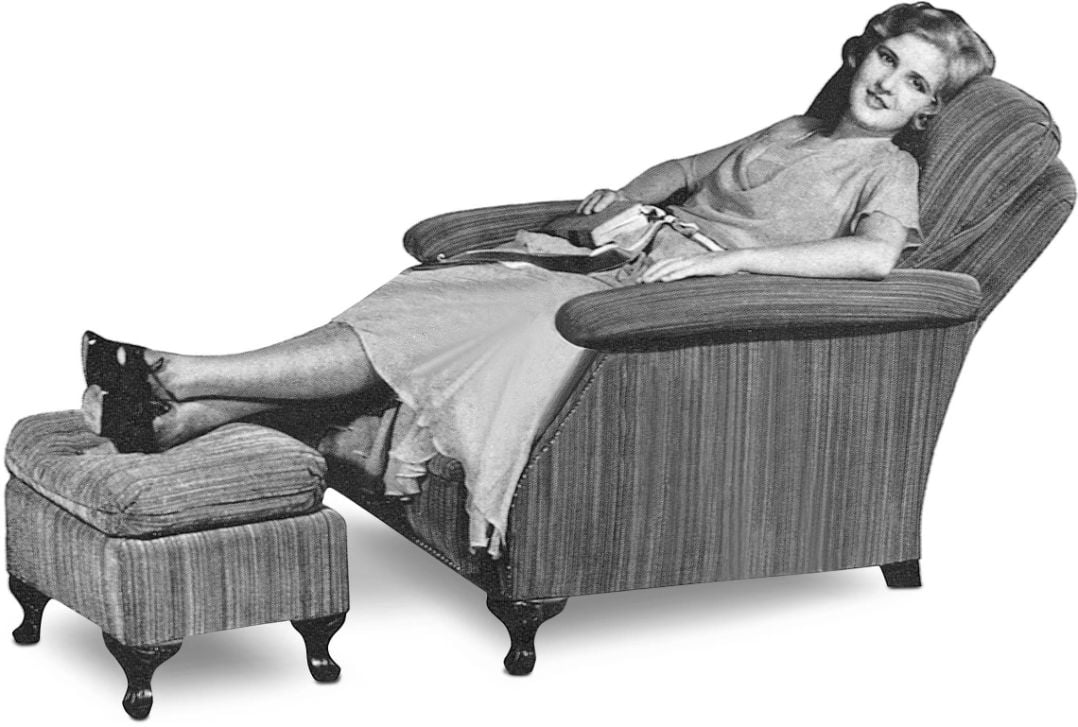 On the tail end of the great depression and rise of World War II, the 1940s were a stressful time for the country and also for Floral City Furniture.

Despite the weight of world events, the company continued to persevere. In this decade, the company started the first stand-alone La-Z-Boy factory.

Unfortunately, after only one year of operation, the outbreak of World War II caused the plant to convert solely to the production of military items. This continued from 1941 to 1946.

During this time, company employees caught up on the behind-the-line efforts of their friends and family in the La-Z-News. Today, the company still shares their internal news through a similar digital newsletter.

The brand added a built-in ottoman and footrest to their chairs that they called the “Otto-Matic”.

La-Z-Boy also enhanced its chairs with an optional vibration feature. They called this the “La-Z-Boy tranqualator”. 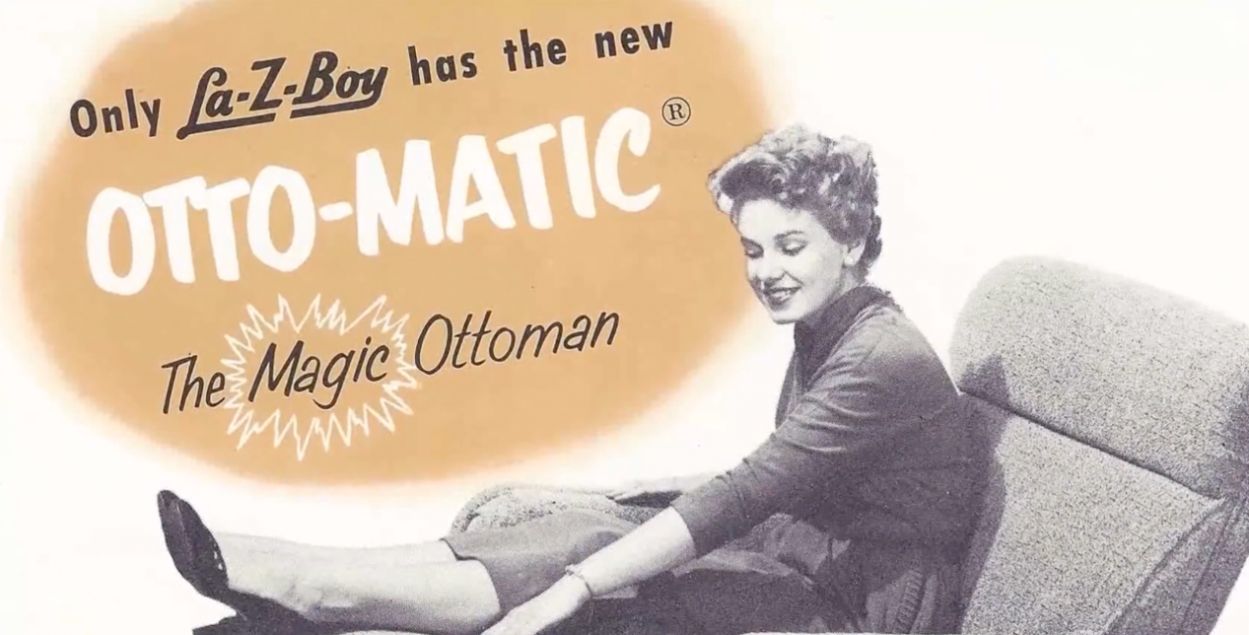 The 1960s was a year of expansion for the company. La-Z-Boy factories expanded throughout small rural towns in the United States to Newton, MS, Redlands, CA, and Florence, SC.

The 1970s were an era of bell-bottoms, disco, and innovation. With this, La-Z-Boy released the Lounger. This new chair can be placed a few inches from the wall and still recline with ease. 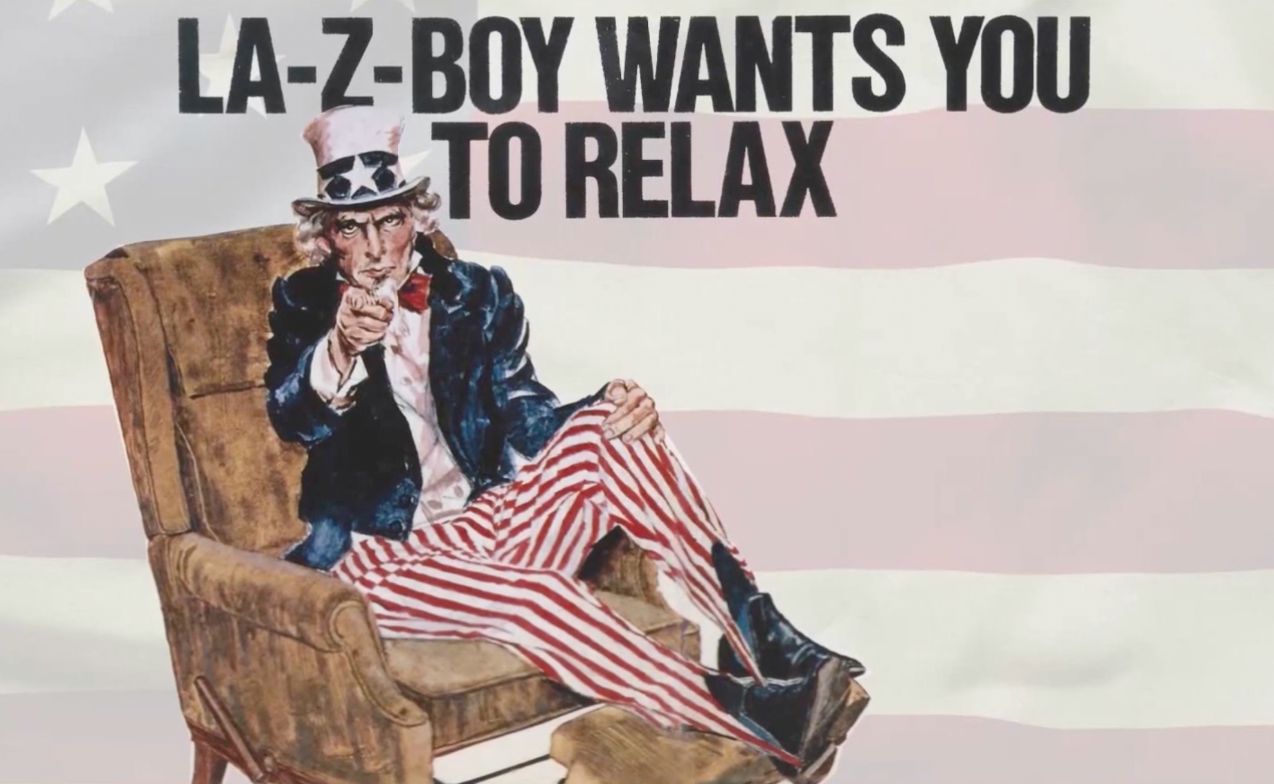 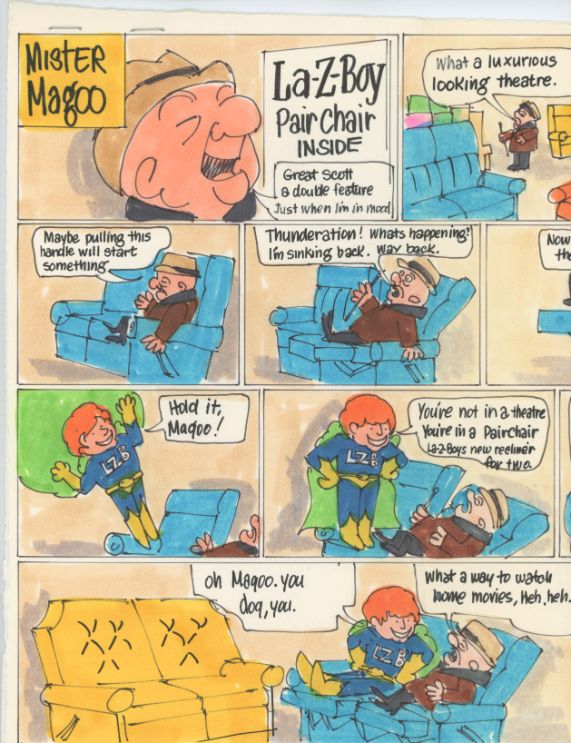 By the 1980s, La-Z-Boy proclaimed that “nobody has rocked more babies to sleep than we have.”

In a wave of success, La-Z-Boy continued this momentum by developing a wider range of motion products. La-Z-Boy introduced reclining sofas and sleeper sofas. They also released the very first line of stationary sofas.

In turn, La-Z-Boy took on the slogan “and you thought we just made a good recliner.”

Through the 1990s, La-Z-Boy expanded its product line even further. The company also participated in the LADD Furniture Deal, taking on partnerships with American Drew, Kincaid, and Hammary.

As a result, La-Z-Boy now offered a wide variety of upholstery goods, but also various case goods, including chests, tables, dressers and bookshelves.

Up until this point, the brand was most commonly known for its recliner chair and upholstery. To show off the expansion of their product line, La-Z-Boy creatively used Racoons as mascots in their advertisements with the slogan, “that’s a common misconception among raccoons”.

Throughout the decade, La-Z-Boy showrooms and galleries opened across the United States, Canada, and Spain. 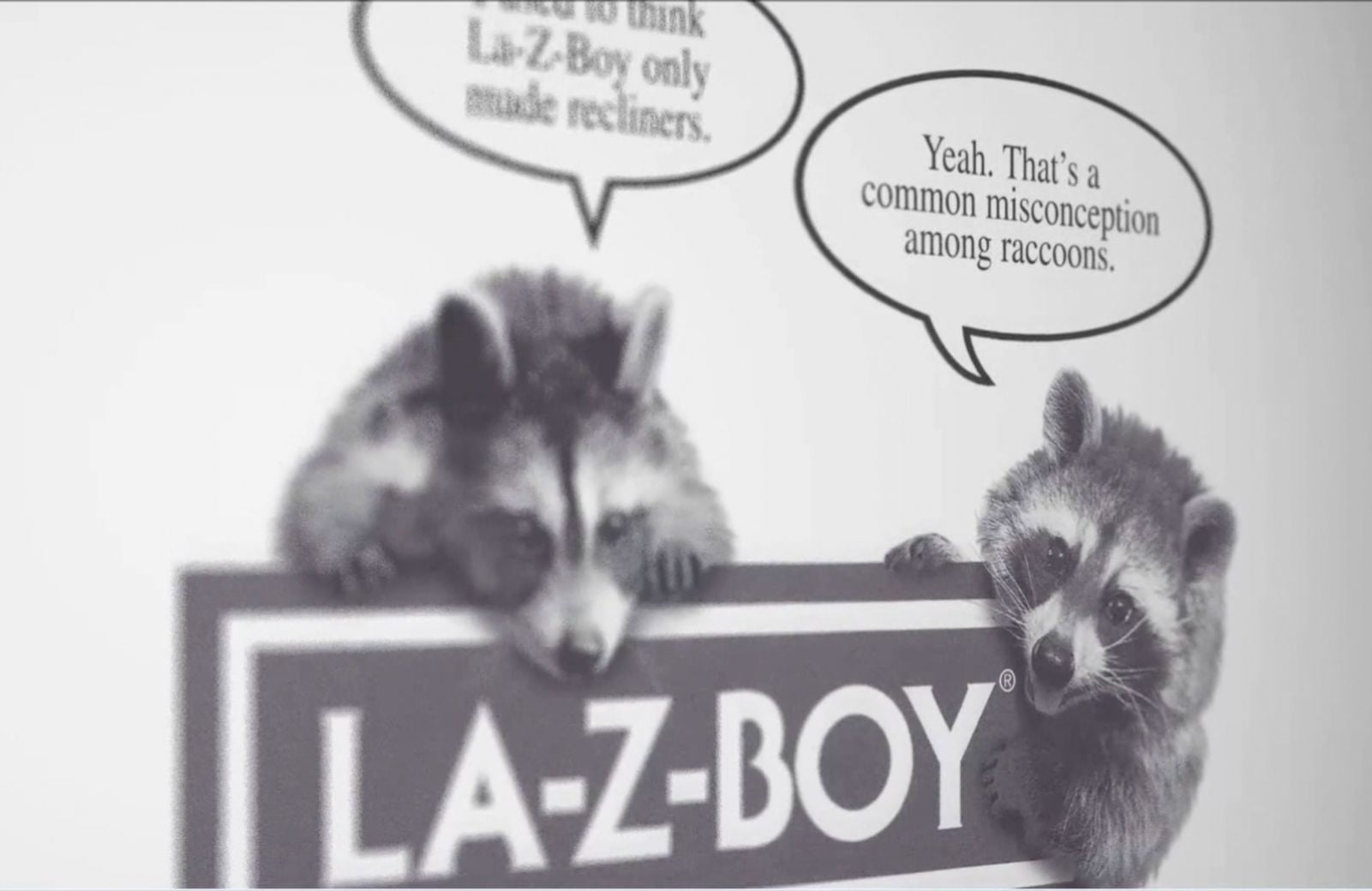 The brand had even made its way into pop culture as it collaborated with the popular TV series, Friends, to make a special collection of recliners. La-Z-Boy also went on to have products featured on Dancing with the Stars and The Ellen Degeneres Show.

In 2001, La-Z-Boy developed the next generation of La-Z-Boy furniture galleries. These galleries were larger than any La-Z-Boy showrooms in the past with a huge expansion of inventory, including decorative accessories.

By 2010, La-Z-Boy began to adapt to the digital age introducing the first mobile site, Ipad app, and 3D room planner. La-Z-Boy also introduced the first impressive power recliner XR offering the reclining function at just the touch of a button.

Unlike other companies making headlines due to corporate conraversies, CEO scandals, bailouts, and bankruptcies, Forbes identified La-Z-Boy Incorporated in its 2013 list of America’s most trustworthy companies. 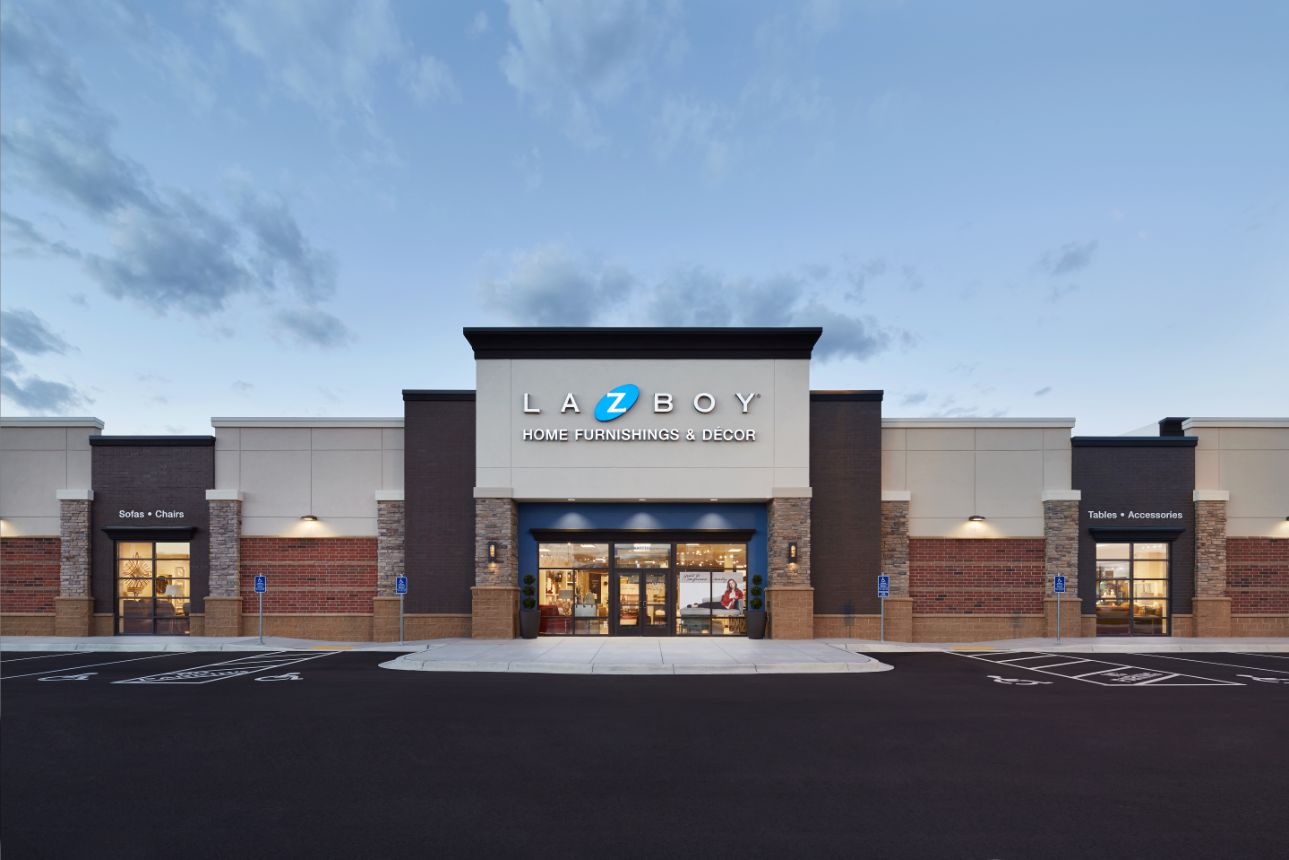 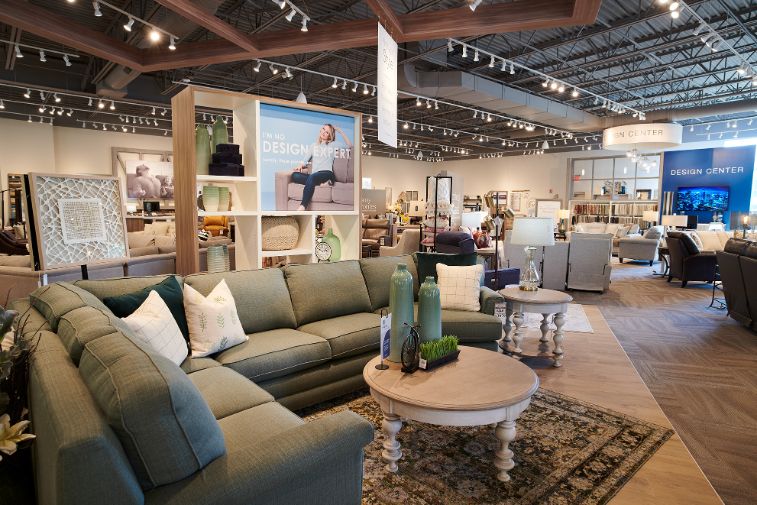 Today, La-Z-Boy honours the past and embraces the future. The principles of its founders are still what drives the company forward today.

With consistent work toward quality and innovation, La-Z-Boy continues to bring comfort to their clients and enriching lives by turning houses into homes.

The La-Z-Boy headquarters now resides in Dayton, Tennessee. The company has a total of 325 stores, 11,000 employees, and continues to sell furniture across the world.

Not only does La-Z-Boy offer the iconic recliner chair and comfortable upholstery, but the brand is proud to make furniture suited for every room of the home, including the dining room and bedroom.

La-Z-Boy not only places emphasis and value on the products they provide but the services that enhance the enjoyment and longevity of their client’s purchases. In turn, La-Z-Boy offers complimentary interior design services, white-glove delivery, and a comprehensive warranty with the sale of its furniture.

It is safe to say that the future of La-Z-Boy will continue to be as rich and inventive as its history.

The History of La-Z-Boy Ottawa & Kingston

In Ottawa / Kingston and Easter Ontario has had a long history with La-Z-Boy recliners going back well over 50 years.

Initially, La-Z-Boy recliners were sold by general dealers in the region including Van Leeuwen’s, Valley Squire, and even Colonial Furniture to name a few.  Some of these dealers are still present today and continue to carry some of the more popular La-Z-Boy chairs.

With the changes in styles and technology over the decades, the brand has continued to resonate well with Ottawa’s residents and with it, the desire to further customize their recliners and take advantage of the broader line of La-Z-Boy products that were made available with their full line-up of sectionals, stationary sofas, ottomans, and even case goods.  The focus grew beyond the recliner to provide whole room comfort.  To that end, the first La-Z-Boy Comfort Studio was opened in Ottawa in the early 90s at Van Leeuwen’s location on Hazeldean Road.

This was followed by the region’s first dedicated La-Z-Boy Furniture Galleries store on Hunt Club Road in 1998; opened by Paul Raymond.  For the brand, this was an important step as Ottawa and its residents now had access to all the manufacturer was able to offer, including its subsidiary brands  Hammary – focusing on occasional tables, Kincaid Furniture, and American Drew – focusing on solid wood furniture for bedrooms, dining, and living rooms.

A second La-Z-Boy Furniture Gallery location was added in 2000 on Cyrville Road (including a warehouse) to help serve the east end of the city, and the Kingston location was opened in 2005.

The Maxwell brothers, James and David, purchased the two stores in Ottawa from Mr. Raymond in 2011 and acquired the Kingston location in 2012.  Born and raised in Ottawa, the Maxwell’s have continued to invest and grow the La-Z-Boy business over the last ten years to help better serve the residents in Ottawa / Kingston and Eastern Ontario.

In 2016, a new location was added on Campeau Road to serve Kanata, the west end of Ottawa, including Stittsville, Carleton Place, and up the valley through Arnprior and Renfrew (yes, we even go to Petawawa!).  As a La-Z-Boy Home Furnishings & Décor store, it was the introduction of a new retail concept for La-Z-Boy; effectively mixing stationary and motion furniture for any room in the house… keeping the focus on comfort and style.

That same year saw a relocation of the Hunt Club store down the street to 290 West Hunt Club and the second La-Z-Boy Home Furnishings & Décor concept store for the region.

As we all get through the challenges that 2020/2021 has presented, La-Z-Boy continues to be excited about what’s in store for Eastern Ontario.  From the new bridge opening this year (2021) on Campeau Drive, to planning store renovations and expansions, the La-Z-Boy team is honoured to serve the residents of Eastern Ontario as we continue on our local mission of creating customers for life – one stylish and comfortable room at a time.

The history of La-Z-Boy lives on and continues to evolve in each and every one of our happy customers.

At La-Z-Boy Ottawa & Kingston, we strive to maintain the La-Z-Boy name by helping our clients find comfortable and stylish furniture that best suits their needs and preferences.

Are you looking for quality and comfortable furniture that lives up to the La-Z-Boy name? To get started, take a look at some of our best selling furniture:

Our team of design consultants and expert interior designers can help you find the perfect furniture for your needs, style, and space. With our complimentary design services, our team will ensure that whatever furniture you purchase fits seamlessly with your home decor.

Visit us at a local showroom or schedule a visit online to get started!

We look forward to meeting you and turning your house into a home.

What to Expect When Purchasing at La-Z-Boy Ottawa & Kingston

What Furniture Styles are Available at La-Z-Boy? Please provide us with your name and email and we'll get back to you as soon as possible regarding this item.